A gentle reminder from the Referees' Society 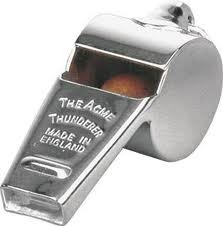 Paul Daniels, Society Discipline Officer, has issued a note to all clubs.

I'm sure what he talks about doesn't occur in NMCL matches, but it's worth gently reminding ourselves, our teams and our spectators. Here's what he says:

It is a little-known fact that, on joining the Referees' Society, whether in Staffordshire or North Mids, a referee is not only issued with whistle, shirt, socks and shorts but also one 'deaf ear' which comes in very handy at times. However, their other ear works just fine and it is this ear that is picking up increasing amounts of hot air from the touchline (by which I mean the technical area AND spectators) that is directed at the poor referee and the opposition.

I am receiving reports of language used, particularly towards players, that would be deemed unacceptable in any other social sphere. Referees have enough on their plate dealing with 30 players on the pitch and should not have to concern themselves with boorish behaviour off it - that is the responsibility of both clubs and we ask for your support in that regard. A little sporting behaviour towards the visitors tends to go a long way in Rugby (and in the bar). I do hope that I won't have to pass on the grumbles of our referees to the clubs for action.

Finally, a word to Coaches - if you want to ask a question about a decision that the referee made (or didn't make!) then the correct time and place is in the bar after the game NOT during the game itself.

 Week 2 of the NMCL The results are in (mostly) and the website updated!

Clarification about "Squeeze Ball" in NMCL  Please ensure that all coaches, players and those refereeing NMCL matches are aware of this.